DappRadar and Dapps that comes from the future

DappRadar and Dapps that comes from the future

I will simplify the idea

For example, a developer has an idea for a application he tries to make it real and put it on the market maybe now he be in one of the next stages

stage 1 – Just an initial idea for application in any field, NFT, DeFi, or any thing based on web3

stage 3 - Getting started, writing the code, creating a prototype and testing it

stage 4 – The first model is complete, but it needs, for example, investors
or co-founder or some programmers or marketers to join the team

If there is a section in DappRadar, developers or investors can add their applications before they are launched in the market and precisely define the application at what stage exactly
and on which network exactly does he intend to launch Ethereum, Solana, or any other blockchain network and what is missing to can launch its application

But this section will be useful to several parties

He can now create publicity and promotion for his app even before it is launched,
and perhaps he can attract investors, cofounders, and talented employees to join his idea.
He can now put his application even if his application is just an idea or in the implementation stage or pre-launch stage on the DappRadar for others to see

Now DappRadar owns a database of applications, ideas and future trends in the crypto industry

DappRadar can now produce reports and information about the future, not just the past and the present

Investors can track the different applications in their different stages, and if they see a promising application, they can invest their money in it ,or join as co-founder or even as a talented employee

Or if you are an investor with small amounts, you can wait and follow the project until the launch stage, once it is launched, you are ready to buy the token or the coin that it releases at cheap prices and wait for its prices to rise after that.
You have chosen the projects that you see as promising and follow them through DappRadar before they launch and as soon as they are launched, invest in them

I think with this idea, DappRadar would have become an explorer of the future in this industry

This forum and the YouTube channel can be an outlet for anyone who has a new idea for an application to
announce it before implementing it, and therefore the YouTube channel will be more important and more views, and DappRadar will be a participant in building the future of the crypto industry and making more profits.

The idea is just for discussion, it may be good and maybe not from reviewing the different ideas of the members in the community, maybe in the end we come up with good ideas to implement them

I am waiting for community opinions and comments

cause there interested in future that’s why we here voicing are thoughts. imma read rest of it but when i read that i was like =/

dude i got 2 nfts. …full flat out scams…no way is it a good idea to give scammers a future platform to steal peoples money…also are these developers gonna be so open about there coding like open source that?. let people look at the progress? some developers might not like that.also on discord they show net projects all time…like theres nft new mints ect ect ect you need pro tho to see that. 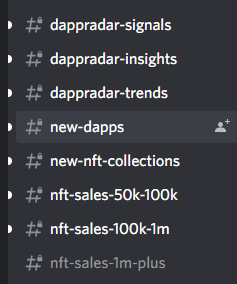 @madeafterdeath I agree with you completely
But what I mean is a section in which the developer can talk about his ideas and present his products before launching them without responsibility on DappRadar. It will be clear that they are only ideas or products that have not been launched yet
Of course, there will be bad ideas and scammers and also will be good ideas and promising projects
If you browse DappRadar or any other website interested in existing projects, you will find many bad projects displayed.
Any website displays everything and in the end the user is responsible and has the freedom to choose whether he wants to browse only or wants to invest in any cryptocurrency he want some lose, some succeed

that’s what promotions is for…in discord and you could open a subject matter on the forums about it see if you can gather developers to do something like that.

and open source educational game being built by a community sounds better tho. maybe put it in suggestions some where.

@madeafterdeath Perhaps the developer’s product has passed the idea stage and his product ready and tested and ready to launch, he wants to announce it before it’s released ,There are large and famous companies do that , they announce product before its launch
I mentioned several stages, the product may be at any stage of them

but i feel like that would be something different from what dappradar is .it would be building a game. Or something else when i think of future i think of the gaming side of it…its entertainment people love it. and it can be free.

@madeafterdeath it is a good idea

and this stage i might add is the grab money and run stage.

@madeafterdeath This is the purpose of publishing most of my topics is to discuss and eventually come up with good ideas ,You are now offering good ideas

@madeafterdeath what you mean ?? I did not understand this part well
Then launch it =) lmao…see how it goes come back to dappradar see if you can get a AMA =)-

i mean launch the game if its all ready up and running. u got it made then launch it what are you waiting for?

no i fallen to a scam before promising Cyber tv series which they couldn’t be bothered to make as well as a game they promised they was gonna make looked awsum never made…some of lengths these scammers go to is untrue nope.by awsum i mean no…no it didn’t look awsum but i was like this is the one cute dinosaurs.

we cant predict the future.

@madeafterdeath You are right and I know very well what you mean and what you are talking about
But even in the already existing projects in any field, not only the crypto field, there is a possibility that we will fall into a failed project that makes us lose our money
For example, who invested his money in Bitcoin and Ethereum, which are very strong Cryptocurrency and lost a lot of money in the previous period due to the down of the crypto market