Our DAO must consider token liquidity and treasury management as two important parameters for RADAR’s long-term price stability, ease of trade for RADAR investors and traders, and runway for the DAOs operations.

In this DCP, we’re proposing to increase the DAO’s Protocol-Owned-Liquidity by setting up a new Treasury Bills campaign on ApeSwap.

Rewarding Liquidity Providers (LPs) through farms and acquiring Protocol-Owned-Liquidity are both very important. The former ensures deep depth and low slippage and the latter increases the DAO’s control over liquidity in the market.

There is some traction on ApeSwap in regards to liquidity, treasury revenue, and users, and would like to slowly reduce the reliance on rented liquidity and increase the volume of Protocol-Owned-Liquidity.

As the World’s Dapp Store, DappRadar DAO has an important role in ensuring the balance of our RADAR token and a long runway to afford our operation costs including contribute-to-earn, Bounties, more gamification, and open-source development.

In order to scale the mission, it’s our responsibility to ensure good treasury practices and minimize our operational costs. That involves ensuring that our token has a stable price and deep liquidity so that it can be effectively traded by our DAO members, contributors, and partners.

The previous proposals here and here, have shown that we have been able to apply good treasury management using the unclaimed Airdrop tokens as rewards for our Liquidity Providers.

The two Liquidity Platforms that we have currently used are SushiSwap and ApeSwap. SushiSwap is known as rented liquidity, as you have to keep paying the Liquidity Providers a certain amount of tokens every period to maintain the Liquidity: as soon as you stop renting the Liquidity, it disappears. This method is quite attractive in the short term as it allows us to get a healthy level of liquidity rather quickly. However, it puts a burden on our treasury and is not very sustainable long term.

The other option is ApeSwap which additionally offers a liquidity program known as Treasury Bills, providing us with POL. Instead of renting the liquidity, it is better understood as a rent-to-own program: we allow Liquidity Providers to swap their LP tokens for RADAR at a discount and also an NFT that represents their treasury bill. Ultimately, DappRadar DAO owns the liquidity rather than having to spend our tokens on incentivizing investors to provide liquidity – liquidity that can be used on multiple chains.

To get a better understanding of how this makes a difference, on SushiSwap we were initially rewarding Liquidity Providers ~555k RADAR/day to achieve a liquidity of $1,590,552. This was a pure sunk cost to our DAO. On the other hand, we were rewarding Liquidity Providers on ApeSwap 261k RADAR/day through the rewards, which led to us own $120,742 in POL and achieving a liquidity of ~$200,000. 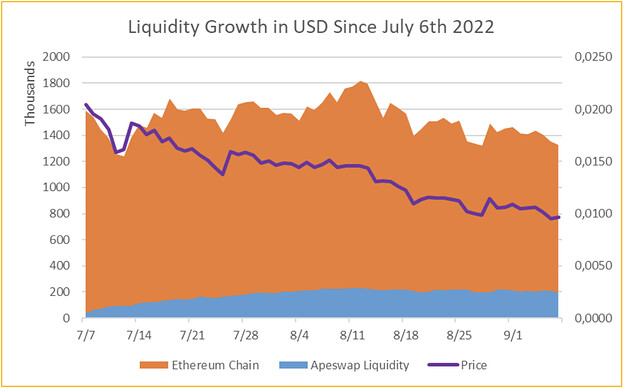 In conclusion, while maintaining sufficient liquidity on BNB, for every $1 that we spent, we received $0.87 (pre-ApeSwap success fee). Instead of liquidity becoming an operational cost, it became an asset.

After working closely with the team at ApeSwap DAO, we have already begun reducing the incentivization of rented liquidity and increasing the incentivization of protocol-owned-liquidity. By lowering Sushi’s rewards and APR by 20-25%, it had minimal impact on liquidity in Sushi’s protocol but lowered our expenses by 20%. The amount of savings achieved equates to $360K per year approx.

Following this, it makes sense to continue this trajectory of reducing our spending on rented liquidity and increasing the rewards on ApeSwap, expanding our treasury and runway, and reducing operational costs.

Why would anyone do a 30 day vest on a token whos price is only down so far. In 30 days, you could buy it at spot price for even less without anything involving treasury bills. In most scenarios as well looking at any treasury bill, its rare to see much of a discount at all. Many times its in the negative discount price (costs more than market).

The discounts go negative because the users are buying the bills, that’s how it works!
And in regards to the token price, how can you know for sure if it will go up or down in 30 days?

Despite the overall positive sentiment for the ApeSwap Treasury Bills Proposal, it has not achieved the necessary exposure to reach the required quorum of 20 Forum votes. This is largely due to the overlapping campaign and focus on the Cross-Chain Developments Proposal. As DappRadar is still in its early phases of governance, there is currently no outlined governance process for a situation where a Forum Proposal’s quorum is not met but not outright rejected by the community either.

Therefore, it is motioned that we extend the current Forum Proposal duration for 3 more days, until Friday 21st October.

This will provide the community with enough time to discuss the benefits and costs adequately, and make any amendments to the Proposal if necessary.

This is great for the token. Although the Treasury Bills sell out quick this is a no brainer for the RADAR token.

Then this would be amazing for DappRadar, because they’re able to acquire a higher liquidity level for a low price. And the fact that discounts are normally low is a great signal, because it shows that there is high market demand.

Very excited to see the support for this proposal!

If you size up the entire program, its categorically a better alternative that the current renting of liquidity that is happening with DCP-4. If you think about it, there is a $0 return on the RADAR that is spent to rent liquidity. You do see short term liquidity, but like renting an apartment, when you stop paying rent (paying RADAR tokens for liquidity mining) you no longer have the apartment (the liquidity leaves), thus a $0 return. A sunk cost and a true spend.

Everyone knows owning is better than renting because you turn a spend into an investment.

With ApeSwap Treasury Bills we can take that same renting allocation and turn it into an investment. Thats what is being proposed here. Invest the RADAR balance sheet rather than spend the balance sheet. TBills turns that $0 return into an ~87% return.

Welcome @ApeSwapDAO and @apegineer. It’s great to have the ApeSwap team on the ground zero helping to build one of DappRadar DAO’s most valuable assets: it’s treasury.

I’m sure, that over time, more questions will start to arise as the impact of POL becomes more apparent — so do keep providing awesome analogies like ‘renting and owning’, it goes far in keeping everyone educated and clued in.

Our joint proposal will provide our community with better liquidity when trading RADAR while also increasing our treasury reserves to scale the DAOs operations. It’s a win-win.

Building liquidity on BNB with ApeSwap is also an important step in our mission to be cross-chain native!

Having the team openly communicating with the community is a positive step forward as we continue working together.

Personally very glad to be able to leverage such an innovative and sustainable DeFi primitive as Treasury Bills — and work alongside a passionate and technical team. It’s a great combo. Looking forward to further engaging with the community as this Proposal develops.

How much is apeswap making out of this how much has it made off of radar so far? with bonds? and the liquidity why is it so important to you that we get said bonds. i thought it was strange. Be Honest as well please.

I’m weary of ape swap i first saw your platform on Autoshark who did a runner on me after dumping the price. Said cya thanks for the fish. I understand that you deal with alot of projects and this just might be a coincidence but auto shark was also begging for people to buy bonds before they did a runner was like $45 a bond which turned into like cents. We have gone Undecided ere and 2 people come out of wood work and the DEO turns up. (obv this is you doing a great job on your projects side) but im also looking out for mine. Now im not saying your gonna do a runner but how much $£$£$£ u shuffling off us with this? Personally i want dappradar to do what you guys are doing but there own version of it. so i sorta know how this goes. and i know how it also could be abused.

How much is it costing us?

Also staking radar for bananas could that ever happen??
And by the way i know i have come across sorta aggressive but i do understand you are partnered with dappradar and due to that have bought and staked bananas on your platform. So im trusting in the team a little ere but i feel they need to watch out for projects that would also take advantage of are’s.

Thanks for the questions @madeafterdeath.

A/ How much does ApeSwap Treasury Bill cost?

That being said, as one of the organizations that joined in @ApeSwapDAO’s Early Program for Treasury Bills, DappRadar doesn’t have to pay the initial overhead cost. This emphasizes our long-term partnership with them too.

To get a better understanding of why we are exchanging users’ LP tokens and issuing bonds rather than allowing them to stake the LP and providing yield farming rewards, is because it means that DappRadar and DappRadar DAO then owns the liquidity rather than temporarily incentivizing the LP holder not to sell the liquidity.

That’s it’s called Protocol-Owned-Liquidity, we own it and therefore are less likely to sell it and our DAO gets rewards as an LP provider. More stable liquidity depth and more revenue for DAO? Yes, please.

Our Content Team with @nederob does a great job of explaining the differences in our recent blog. It’s definitely worth a read: 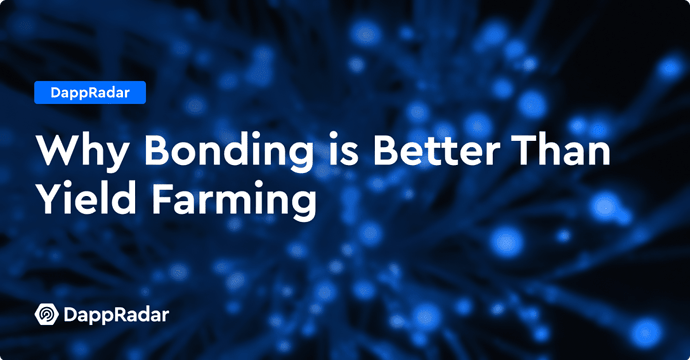 Why Bonding is Better Than Yield Farming

B/ Could staking RADAR for BANANAS ever happen?

Well, it’s already possible to earn BANANA with the RADAR-BNB LP pairing in the Binance Smart Chain on ApeSwap.

It would take quite a bit of calculation and balancing on the tokenomic side, but I guess it could be interesting to choose the token (i.e. BANANAS) that you are rewarded with for staking RADAR. Interesting idea.