This document is presenting the process for creating and advancing DappRadar Community Proposals (DCP). It can always be modified and influenced by the community feedback. Feel free to suggest any improvements in the General thread.

If you have any questions, before or during this process, we’re waiting for you in our Discord server.

This governance process is focused on proposing, discussing and deciding the next steps for the DappRadar DAO. We have defined some initial Workstreams which will help us to keep things structured and organized.

Currently, there are the following Workstreams:

The workstreams proposed are flexible. There is always the possibility to add or remove a workstream. If you have an idea that doesn’t fit into any of the workstreams above, you can suggest a new one here.

Once the Forum Proposal is successful (see criteria above), publish your proposal to Snapshot and initiate the formal voting.
The Snapshot proposal threshold is 100,000 RADAR tokens.

Voting on Snapshot enables RADAR token holders to vote on proposals by signing a message which is gas free, rather than executing an on-chain transaction, which costs gas.

Voting power is based on RADAR held in the wallet (1 RADAR = 1 Vote) and each proposal is configured as follows:

Early in the governance process, it might be difficult to reach quorum, given the fact that the Airdrop is still on-going and the amount of tokens in circulation is not very high. To kick start the governance process and avoid hitting walls, we are adopting the soft quorum idea. Soft quorum will help the Governance move forward if a proposal would almost certainly have passed if quorum was reached. This is inspired by Shapeshift (FOX) Governance Process.

For proposals that do not reach quorum, assume that 70% of the votes left to reach quorum are against the proposal. If this would still result in a majority of votes being in favor of the proposal, then proposal can be considered passed.

Keep in mind that this document is only meant to act as a starting point for the governance process. If you have any feedback or suggestions, please contribute.

Given the fact that the Airdrop is still on-going and the amount of tokens in circulation is not very high, in order to move forward with the Governance process and not hit any walls so early, I have added the Soft Quorum section, inspired by other DAOs that took the same path early in their Governance process. Looking forward to your feedback. 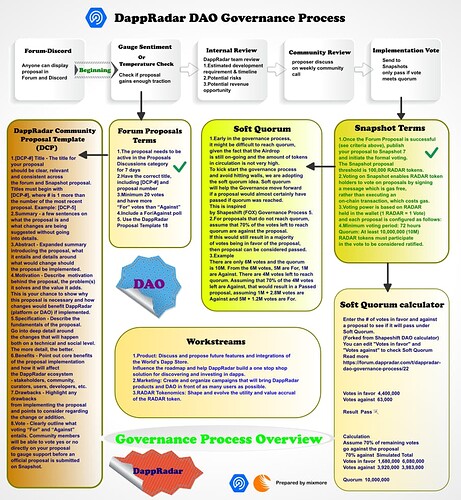 If there are any errors in the illustration and any notes, I hope you will alert me to them so that I can correct them